Something a little different.

Due to an administrative cock up (by me) I uploaded an image to the blog from my iPhone, and for some reason ended up really quite small when it was clicked on the computer.

Well, rectified that and changed the font to one more appropriate for the subject matter :)

As I said in the original post, this is really just an experiment to see if a Dalek comic is possible using toys rather than the more time consuming CGI route I have taken in the past.
The photos in this were taken on my iPhone, so are not as clear as they would be if taken with my camera and some lights.

What it shows me is that it IS possible to do a nice looking Dalek comic this way.

All I really need to do now is write up a story that won't need that many sets, no humans (joints, yuck) and would keep the spirit of my previous Dalek comics.  I do also have Daleks which would make Jennings style TV21 stories possible, including a Golden Emperor I built for them, the Black Dalek and a Red Dalek.

Anyway... here is the updated image and hopefully it will open without issues.

Again, please note that this is not a finished page of a proposed comic, it's a test of sorts :D 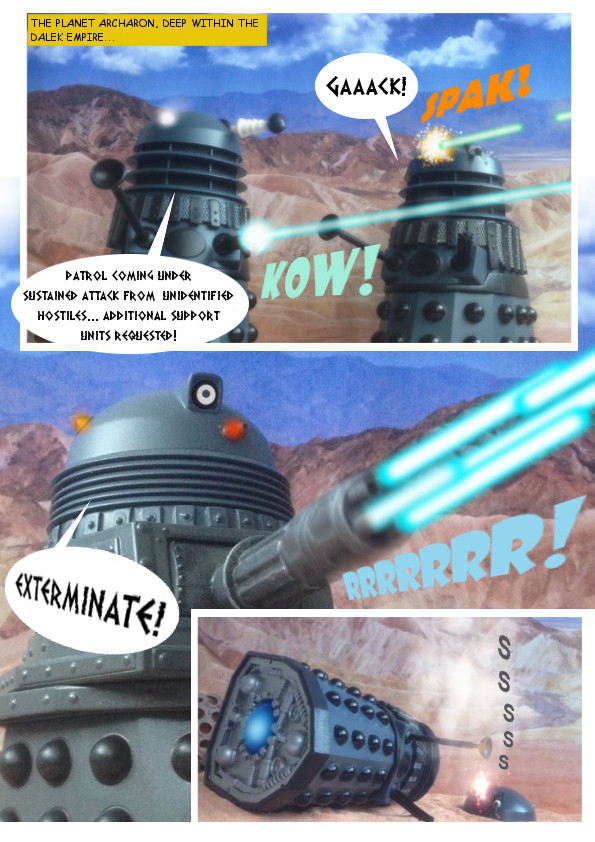